Last week in a somewhat surprising question or statement while discussing opportunities to carry out field research; “Is it true that Western Corn Rootworm (WCR) have more of a heyday in strip till outside the strip under the residue in continuous corn?” My co-worker and I were a bit flummoxed, we have never heard of such. The claim is that strip tilled corn when the roots go outside the till-zone they are more susceptible to WCR larvae chew and damage. In all my years of working with, studying, promoting strip tillage since 1986 I have heard of many things. Now the man telling me this was wanting answers so I went home and began a fairly exhaustive research on-line and have sent messages to seed dealers I know and trust if they know of such. Still awaiting replies.

After numerous hours going through Google Scholar, Pioneer, Bayer Crop Sciences, ResearchGate websites and several more, asking several different questions to inquire and get a response to the question – nothing that indicates that WCR are more active, more prevalent in Strip Tilled fields and cause more damage outside the till-zone. 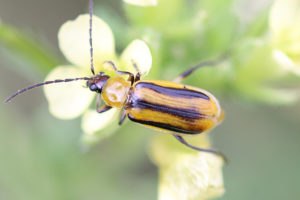 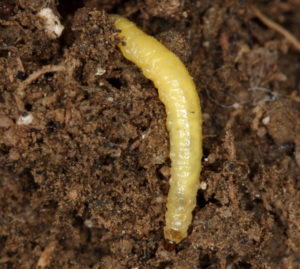 I did discover that WCR do like later planted corn (in northern hemisphere) late May into June plantings that they thrive and populate heavily in those planting scenarios. I also read that the beetles will lay eggs in soybean fields and continue their lifecycle into next years corn crop for those who rotate with soybeans with very little overwintering effects without corn residues. A interesting tidbit; For many years it was simply an obscure species until it started damaging corn in north central Colorado in 1909, so this dang bug has been a pest for sometime in corn production. Once the soil temperatures reach 52 deg. F (11.5 deg C.) the larvae can start moving and eating. First-stage larvae are attracted to the CO2 released by corn roots. Larvae will crawl from 4 to 24inches to reach actively growing roots. Something akin to one of my wife’s arch enemies – the mosquito. Those bloodsucking female insects are attracted to humans who exude CO2.

With the advent of the multi-stack of traits and Bt with the Herculex™ materials and SmartStax™ changes, the efficacy of setting back the eating and lifespans of either European or Western Corn Rootworm larvae to adults is very good. For those of you who also use Poncho Votivo or just Poncho 250, control is in the realm of what you desire. There are still viable insecticides available to growers that do not want to plant traited hybrids. Keeping plants from heat or moisture stress is very important for the control of this pest.

Back to the growers question if these pests chew/damage/and populate more in Strip Tilled fields – I came up with nothing in print. To get a better lowdown on these insects, life cycles, statistics of and more here is a great website:

I will keep looking, listening and asking questions folks. This pest has been a nemesis to many of you and have had to “bomb” them, use other measures to eradicate/control the cutworm. At Orthman Manufacturing, yes tillage is our game as well as specialty John Deere planters on our 7×7 toolbars, but farming is a big enough challenge for us all even as we see the corn prices doing better these last few months. Dealing with this insect is always a presence and in continuous corn like hundreds if not thousands of fields in the Corn Belt of the United States we have to deal with it as well as its cousins the Northern Corn Rootworm, the Mexican relative and the Southern corn rootworm. In Iowa and Eastern Nebraska I have seen all of these guys in one field – yikes!

PrevPreviousHealth of the Soil and Root Architecture that Adapts to Aid Soil Tilth
NextAs you prepare to get the planters ready – Is CRW on your radar?Next
WordPress Appliance - Powered by TurnKey Linux